“Andres Quintana’s victory of last year’s ‘COPA COMBATE’ was nothing short of brilliant, but his fight with Bruno Cannetti during the tournament left some unfinished business on the table,” said Combate Americas CEO Campbell McLaren.  “There isn’t a better way to settle this rivalry than a rematch with the Combate Americas world title at stake.”

Fighting out of Albuquerque and originally from Roswell, N.M., the 27-year-old Quintana notched three consecutive victories in one night, including his first round (2:05) TKO (punches) of Cannetti in the semifinal stage of the tournament, to earn the coveted “COPA COMBATE” championship and accompanying, $100,000 grand prize last December 7.

The win over Buenos Aires, Argentina’s 29-year-old Cannetti, the younger brother of MMA superstar Guido “Ninja” Cannetti, came in remarkable fashion after Cannetti floored Quintana with a right hand in the first minute of the fight. 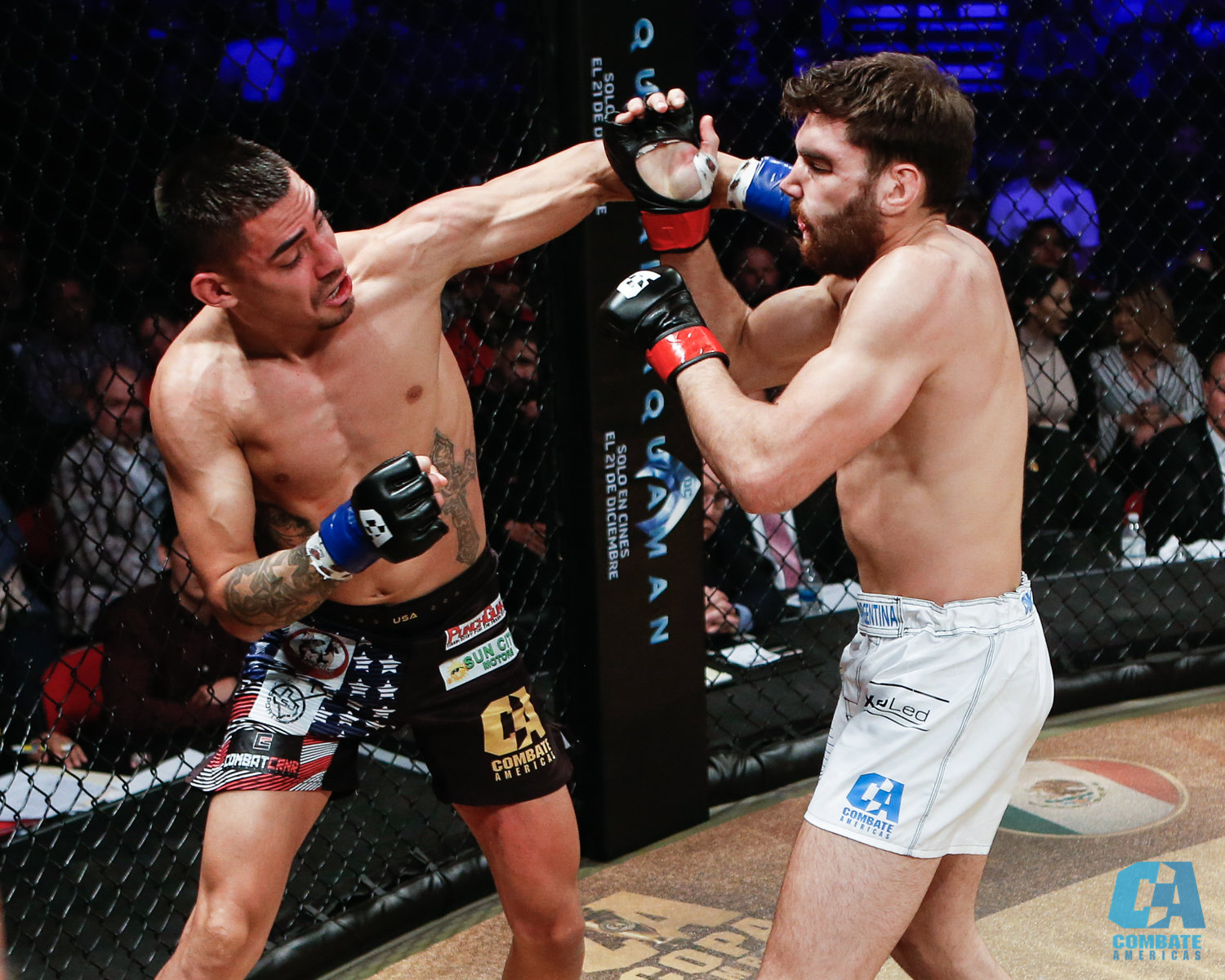 Above: After suffering an early knockdown at the hands of Cannetti in their “COPA COMBATE” tournament bout last December, Quintana (left) staged a remarkable comeback with an offensive that finished Cannetti (right) in the first round of battle.
Despite being hurt, Quintana weathered the storm and made it back to his feet and, with just under a minute remaining in the opening round, unleashed a right uppercut-left hook combination that put Cannetti down and prompted Quintana to follow up with a barrage of punches to the downed Cannetti.

The referee jumped in and stopped the contest at the 2:49 mark of the first round, giving Quintana the victory by way of TKO.  Cannetti disputed the stoppage to no avail.

Quintana’s victory advanced him to the championship stage of the tournament where he scored another devastating, first round (2:49) knockout on Mexico’s Alejandro “Gallito” Flores with a vicious spinning elbow strike.

Since making his promotional debut with Combate Americas in 2017, Quintana has yet to be defeated.  He will look to extend his win streak to nine consecutive bouts in the championship rematch with Cannetti.

Cannetti reached the semifinal stage of the “COPA COMBATE” tournament with a thunderous TKO (ground and pound) of Joey “El Cazador” Ruquet at the 1:32 mark of their one-round, quarterfinal stage tournament bout earlier that night.

Prior to the tournament, Cannetti was riding a three-fight win streak.

Additional bouts for the Combate Americas world championship event will be announced soon.