The Genting Arena in Birmingham will be the place to be on Saturday 20 October, as Cage Warriors returns to the second city for Cage Warriors 98.

Italy’s Stefano Paterno puts his newly-won belt on the line for the first time against Scotland’s Ross Houston in the night’s main event and there are a pair of Cage Warriors Featherweight Title Tournament semi-finals already on the card.

And now those matchups have been joined by five more bouts as the fight card for Birmingham starts to take shape, with a host of crowd-pleasing bouts set to entertain the fans on 20 October.

The first new addition to the card will see lightweights Jai Herbert and Donovan Desmae face off in an intriguing clash at 155lbs. Herbert (6-1) made a successful Cage Warriors debut in his last outing, earning a unanimous decision win over Erdi Karatas at Cage Warriors 94.

The Wolverhampton man returns to action against Belgium’s Desmae (11-5), has notable wins over Richard Williams and Aiden Lee under the Cage Warriors banner.

Also set for action on 20 October are featherweights Dylan Tuke and Antanas Jazbutis in what looks set to be an exciting matchup.

Ireland’s Tuke (4-2) is set to make his eagerly-awaited Cage Warriors debut, against 45-fight veteran Jazbutis (20-25), who is looking to add to his 11 career finishes (four by KO/TKO and seven by submission).

Also on the card, former light weight title contender Alexander Jacobsen (9-3) looks to get back into winning ways against Perry Goodwin.

Undefeated bantamweights will collide when Scotland’s Scott Malone takes on England’s Adam Amarasinghe. Both men are 3-0 in their respective careers, and both made successful Cage Warriors debuts in their last outings. But only one man can take their perfect professional record beyond Birmingham on 20 October. 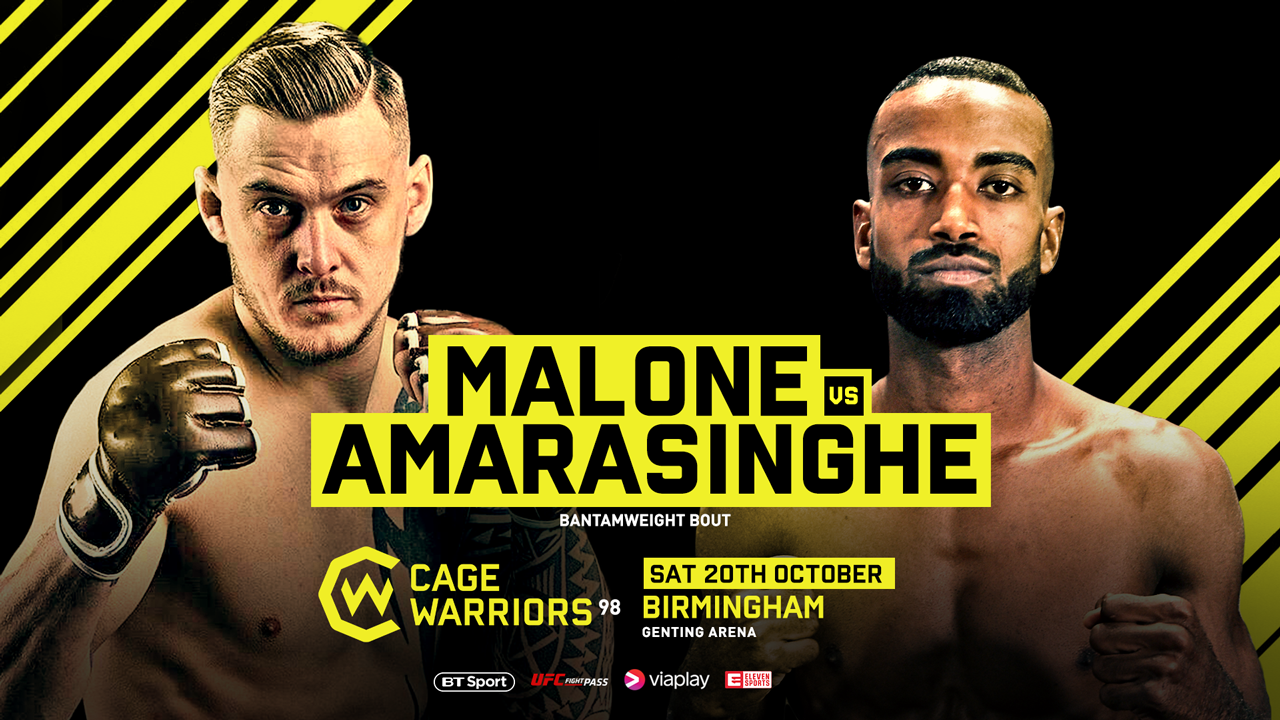 A welterweight bout between George McManus (1-1) and Josh Plant (2-2) has also been added to the card, with both men set to make their respective Cage Warriors debuts.

It rounds out what promises to be a spectacular night at the Genting Arena.

Tickets for Cage Warriors 98 at the Genting Arena, Birmingham are on sale, with a special early bird offer giving fans the chance to snap up their seats at a special 20% off ending at 9pm this Friday. Click here for more information.